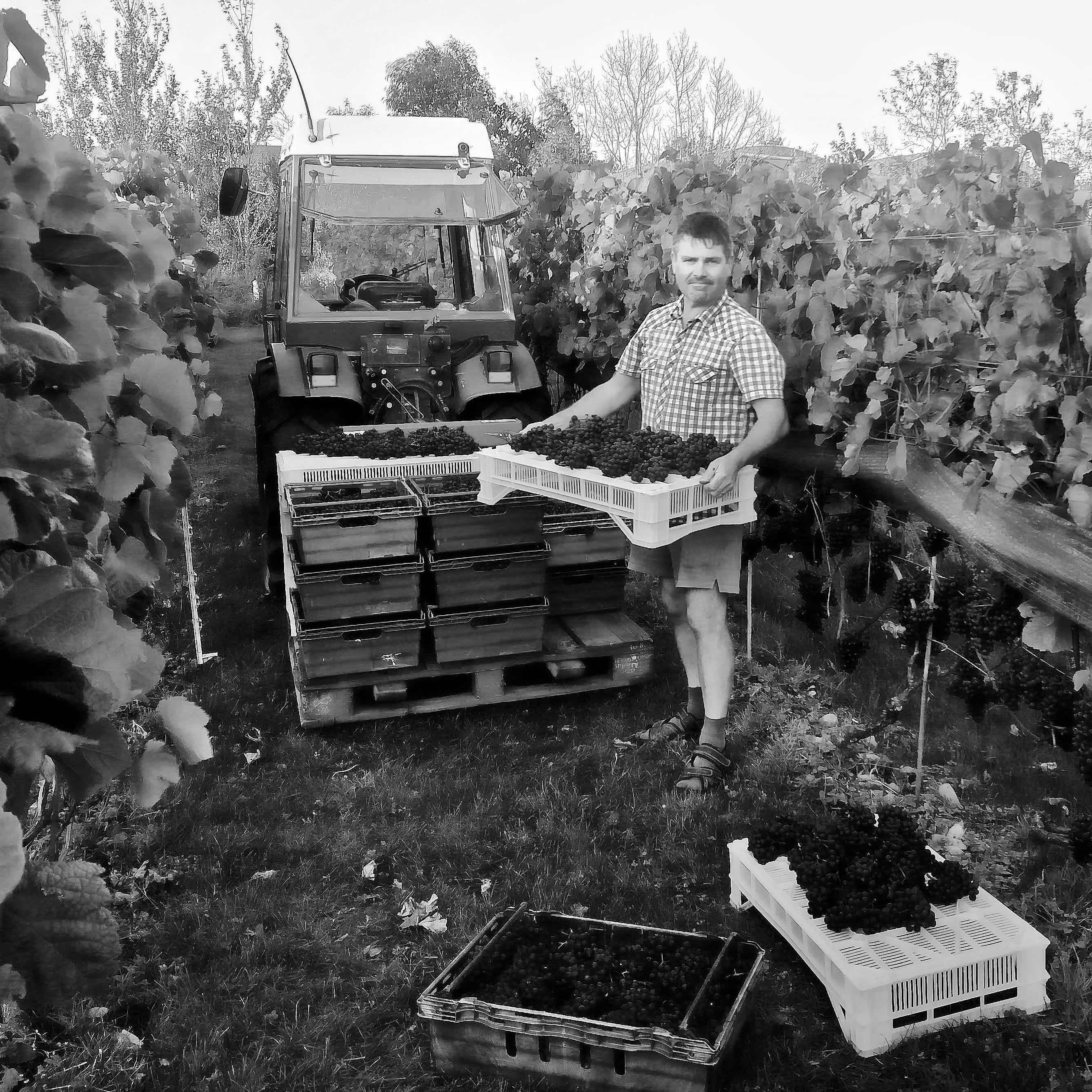 David Llewellyn portrays himself as a ‘fruit alchemist’. Having come from County Mayo in the West of Ireland, he eventually settled in the village of Lusk, in North Co. Dublin. He comes from a family with no farming heritage, but from childhood, he always had an interest in nature and gardening, and very early on, he developed a passion for trees, so much so that already as a child, people were always astonished by how he could identify tree species from a distance.

Later, his interest shifted more towards food plants, and he began to focus on the production of food and beverages, encompassing human health and environmental sustainability.

With such a liking for the outdoor life, David enrolled at Warrenstown College in Co. Meath, emerging in 1986 with a diploma in horticulture, a strong desire to travel, and a particular interest in learning more about organic agriculture. Fluent in German, he went to Germany where he first gained practical experience at Weingut Haug on the shores of Lake Constance, followed by a stint at Weingut Hothum in Rheinhessen, both of whom were converting to organic farming methods in the late 1980s.

Llewellyn became fascinated by the growing of vines and ultimately by the subject of wine. He recalls how, one day in September 1986, he stood in Haugs’ vineyard overlooking Lake Constance, and he noted how the Bacchus grapes were ripening much earlier than the grapes of neighbouring Spaetburgunder (Pinot Noir) vines. This was the seminal moment when he first dared to wonder whether, with suitably early-maturing varieties, one could plant vines in Ireland and make wine, thinking that, one day, he could possibly start on his own account.

When returning to Ireland in 1988 after his two-year learning curve in Germany, he began to research and experiment with the possibilities of making wine. With no land of his own, along with the fact that renting land long-term in Ireland was near to impossible, he could not even dream of starting any kind of farming enterprise. But bitten by the wine bug at a time when in Ireland wine was generally only served with Sunday dinner, the single-minded young man got hold of specially selected vine varieties from German nurseries, and he planted a post-stamp-size vineyard on his parents’ property in County Laois, which he nurtured with love.

Simultaneously, David went to study and graduate at University College Dublin, where he subsequently worked on a Masters, researching Irish terroirs potentially suitable for viticulture.

When the opportunity of renting an apple orchard arose in 1999, David was finally able to establish a small fruit growing farm. Bubbling with energy and millions of ideas, he started to grow apples, and he began to produce apple juice, apple cider, apple cider vinegar, and Apple Balsamic Vinegar.

The wine adventure truly began in 2002, when David had the opportunity to acquire a little more than two hectares of land in Lusk. A dream come true for this neo-farmer, where he established an orchard of apples, pears, and cherries. This prized land also gave him the chance to plant his first vines, with a view to seriously making and selling wine. Needless to say, it was an exciting moment for David, who then started to plant a combination of hardy vines for growing entirely outdoors, and classic wine varieties, which he thought might have the best chances of thriving in the Irish climate. Again, good clones on suitable rootstocks were sourced from German nurseries.

At first, producing wine was a large-scale hobby for the new Irish vigneron, and his initial winemaking efforts were a mixture of success and failure. Well read and determined, David continued to be in contact with his winemaking friends in Germany, from whom he was still learning, and through his own research and experimentation, his confidence and proficiency grew steadily.

Llewellyn cautiously planted more vines, totalling almost 0.20 hectare, and he is now producing around 1500 bottles of wine annually. His production started off making both red and white wine. However, he later decided to produce red wine only, as he found that, on the tiny scale at which he was operating, without the use of filtratration, finings, and high-tech methods, it was easier to make a good red wine than a white wine. The Rondo cépage proved interesting, making small quantities of a surprisingly good and characteristic red wine, though his main wine is a blend of Cabernet Sauvignon and Merlot, along with small quantities of other varieties such as Cabernet Franc.

The wines became more complex year after year and gathered interest. Always attentive and receptive to the feedback from Irish wine merchants and Irish critics who taste his wines, David would never forget the late Tom Whelehan (the earliest eminent wine journalist in Ireland), who was the first authoritative personality to taste and evaluate his initial winemaking efforts, and who strongly encouraged him to pursue his dream.

After years of hesitancy, in 2018, David chose to produce a sparkling wine, diverting some of his red varieties, to make a Blanc de Noirs. Incredible as it is, his first results exceeded all expectations, and so  with his 2019 vintage, he has diverted a larger proportion of his harvest away from red wine in favour of the production of a sparkling wine.

David Llewellyn experiments and learns unrelentingly. He works undeniably hard, but his passion is boundless. He is a true genius and what he has achieved in Ireland is simply extraordinary. He never forgets where he started, and he never forgets his friends and mentors back in Germany, whom he is proud to impress with the wines from his ‘little unlikely Irish vineyard’, as he likes to call it, whenever he returns to visit them.