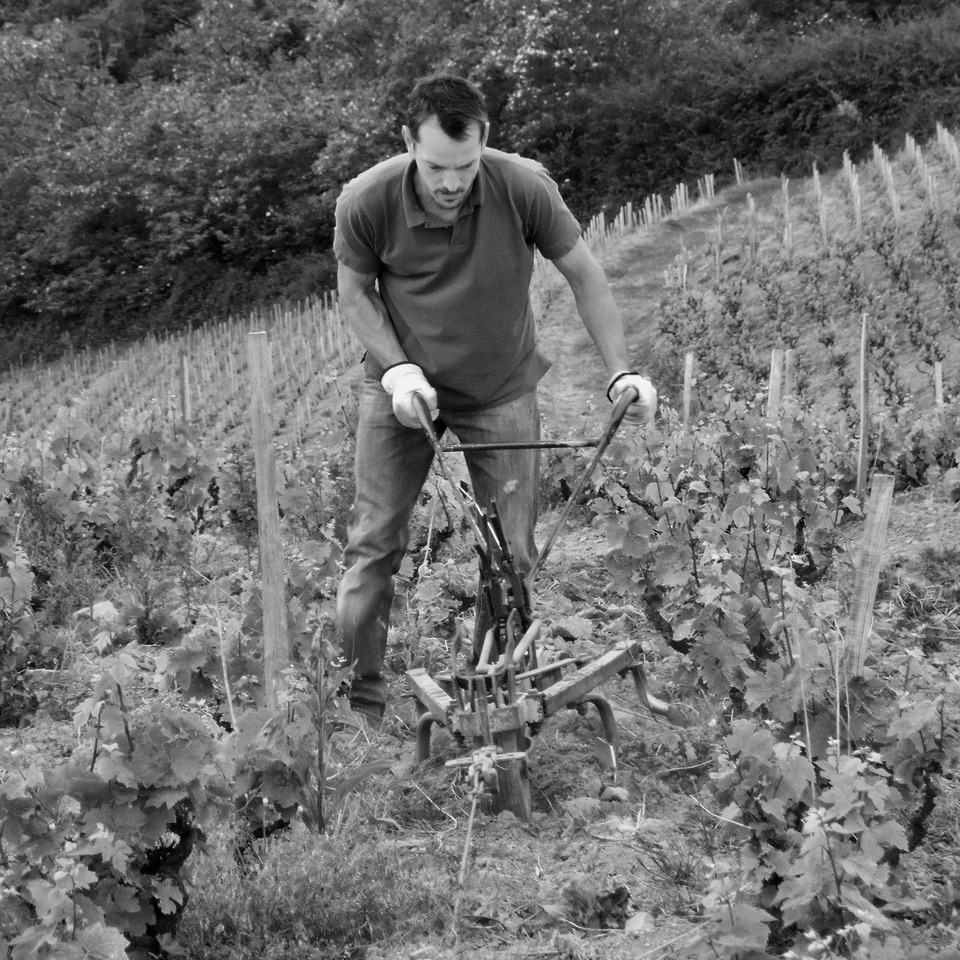 Julien Sunier was holidaying on the Côte Basque when we met him. That was back in 2010 and our encounter happened over a glass of Chartreuse. A seasoned surfer, he had only recently started to produce his own wine.

From a non ‘vigneron’ family and a native of Dijon, Julien Sunier had no clue what to do in life. His mother, a hairdresser, had Christophe Roumier as a regular client - the legendary winemaker from Chambolle-Musigny, who rocketed the family domaine into the cult league.

Julien went for a short stint to work alongside Roumier, who instilled in him the love of farming and winemaking. Only in his early twenties, he took the opportunity to travel and gained experience at vineyards in New Zealand and California, while also practising his surfing.

Back in Burgundy, he worked for winemakers of great fame: Nicolas Potel in Nuits Saint Georges and Jean-Claude Rateau in Beaune, followed by an episode at Domaine Albert Mann, one of the flagship estates in Alsace. Sunier realised that winemaking is a craft and that, most importantly, vines must be allowed to express themselves through the soil with respect to natural balances.

After five years spent managing a négociant business, working with growers from all the Beaujolais crus, Julien Sunier decided to make the terroirs of Beaujolais his home. He got to know many growers. He assimilated the facets of the several terroirs, and therefore was able to rent out a few parcels.

In 2005, he purchased a 19th-century farm ‘La Ferme des Noisetiers’ in the village of Avenas, ideally located at the edge of a forest, at an altitude of 750 meters, with a panoramic view over the ‘haut Beaujolais’. The previous owners were predominantly cereal farmers who had produced a modest amount of wine from a small plot of old vines.

Julien renovated the farm and he constructed a wooden frame winery, while also building an underground cellar to age his wines. There was never any doubt in his mind that he would farm organically with his main objective being to respect nature, the earth, and its treasured biodiversity.

In 2008, his long-time dream became a reality and he produced his first Fleurie. Julien was then able to acquire additional parcels and presently his 7.5-hectare Gamay vineyards planted on granitic soils stretch over three appellations: Fleurie, Morgon and Régnié.

Continuously stimulating microbiological life in his vineyards surrounded by forest and meadows, Julien Sunier eschews all chemicals, opting instead for composted fertilisers and plant-based extracts. The fastidious manual work in the vineyard is assisted by a horse who ploughs the soil throughout the growing season.

The grape picking is conducted entirely by hand with careful selection in the vineyard and whole bunches are loaded into the tanks by gravity. Following fermentation and racking, the wines are aged on their lees in 228-litre old oak barrels for a period of 8 to 11 months.

Due to the severe weather conditions in 2016 and 2017, and the loss of the greater part of his crop, Julien created a mini-négociant business in 2018, working alongside trusted growers, who give him access to rare organic grapes grown in Beaujolais. This project has already inspired many a debutant grower and winemaker in the region. Needless to say, the wines produced by ‘Pur Jus’ are equally as vibrant as the ones produced from Julien’s own vines.

Sunier’s wines are perennially delicious, fresh, and bursting with vitality and energy. They are impressively bright and seductive wines with great balance and welcome acidity.