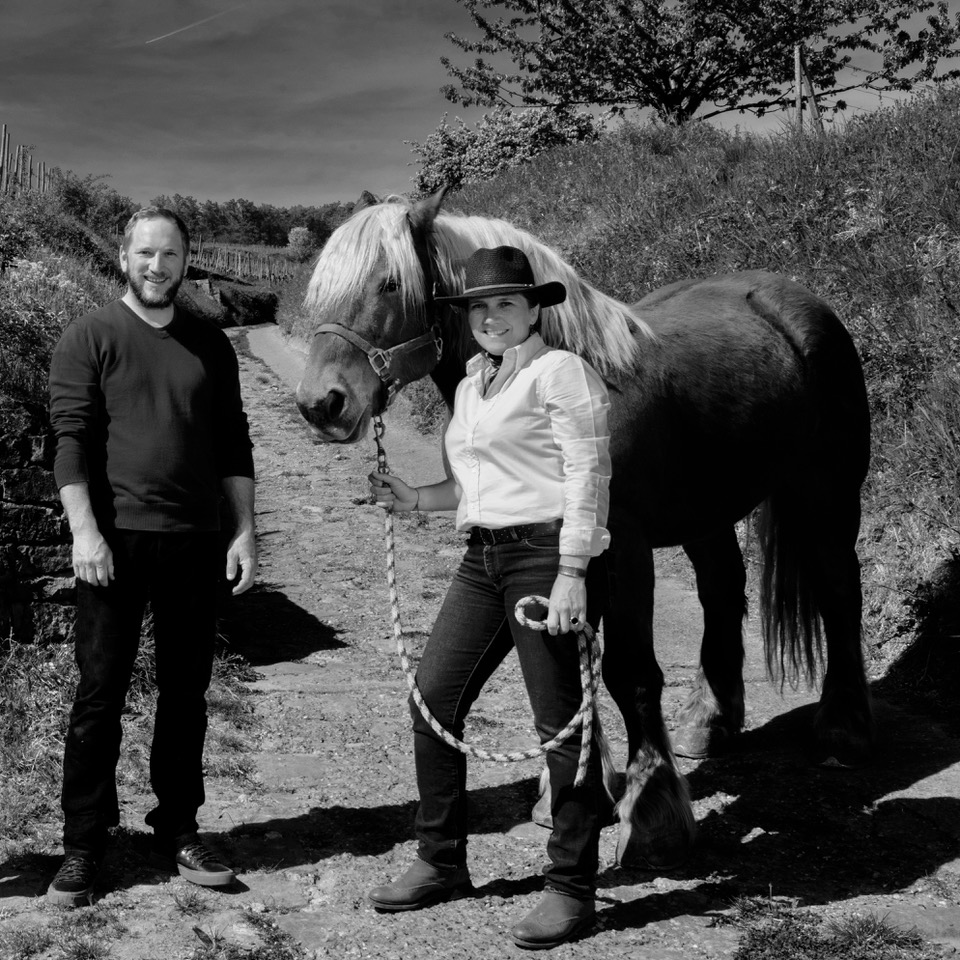 Domaine Valentin Zusslin is a fine estate sitting on prestigious terroirs in the picturesque village of Orschwihr, south of Colmar, where brother and sister, Jean-Paul and Marie Zusslin represent the 13th  generation crafting wine. In fact, their ancestors can be traced back to 1691. The estate gets its title from Valentin Zusslin, who started to produce wine under his own name following the end of the second World War.

The modern history of the domaine began in 1997, when Jean-Marie Zusslin, who had followed Valentin’s footsteps, carefully set about farming following biodynamic approaches in order to serve the land. An early pioneer of the biodynamic movement in a region covered with vineyards, Monsieur Zusslin sensed that he had to preserve the extraordinary biodiversity of his remarkably located parcels, that had belonged to the family for so many generations.

Jean-Paul Zusslin grew up in the vineyards alongside his father and as one would expect, he wanted to become a vigneron. Following a diploma in viticulture and oenology from Beaune, he gained experience while training in Burgundy, although his skills were honed while working at Domaine Zind-Humbrecht and Domaine Marc Kreydenweiss, two emblematic estates, both of which are esteemed pioneers in biodynamic viticulture in Alsace.

After studying law and business, Marie Zusslin’s career set off working for a négociant, although she was still deeply rooted in Orschwihr. She therefore decided to enrol at the Lycée Viticole in the small town of Rouffach, literally ten minutes from her family home, emerging in 2000 with a diploma in viticulture and oenology, and a strong desire to ‘come home’.

From 2000, for almost a decade, Jean-Paul and Marie worked hand-in-hand with their grandparents and also with their parents, which was a significant opportunity for the siblings.

Both Marie and Jean-Paul embraced the life of the estate and since 2015 they are continuing the path of biodynamics led by their father. In an area where monoculture prevails, the duo needs to be attentive, respect and care for their soils and its biodiversity. They are dedicated to farming their vineyards located on noble terroir such as Bollenberg, Pfingstberg, or Liebenberg, where the altitude can reach more than 300 meters, and where the climate is often referred to as Mediterranean, due to the wind and rain protection coming from the Vosges mountains.

A number of the Zusslin’s parcels are surrounded by woodland and hedges, making them a bucolic heaven where peace predominates, and where wildlife flourishes. These often inaccessible and demanding sites are tended manually with the substantial help of Sésame, their draught horse who joined them in 2012. Much like a ballerina with light feet and agility, he ploughs 10 of the 16-hectare estate, scattered in dozens of small plots, while preserving the soils and the deeply rooted vines, some of which were planted back in 1939. Sésame is also an invaluable helper at harvest time. And during the winter months, a flock of sheep ensures that the vineyards stay well maintained.

The cellar is located in the heart of Orschwhir, adjacent to the family home. This is where Marie and Jean-Paul perform their skills to produce their white and red wines. In fact, they are non-interventionists only because the quality of the hand-picked grapes is irreproachable. Following the separate vinification of each parcel, in the most natural way, the wines age on their fine lees for 12 to over 24 months in large wooden vats, made with oak trees from the local Vosges forest.

The siblings make up a charismatic duo. They scrupulously and assiduously tend their vines, day after day, while respecting the life in their vineyards, where they have installed bird nesting houses together with beehives. Also, with the assistance of botanists, they are reintroducing flowers such as a wild yellow tulip that had disappeared from vineyards due to years of chemical use. Conscious of the climate change and the fragility of wildlife, Marie and Jean-Paul have also launched the plantation of trees, including fruit trees, and hedges to restore the balance and increase biodiversity in their vineyards. They are already noticing the resurgence of tit birds, who are so crucial to the vineyard life. In only one day, a tit can swallow up to 25 grams of insects that would otherwise have impacted the vines.

Year after year, brother and sister, Jean-Paul and Marie Zusslin turn out superlative Alsace wines, reflecting the unmistakable character of their vineyards and their noble terroir. They are perpetuating the family’s winemaking tradition and their beautifully chiselled wines pulsate with energy. These are distinguished Alsace wines to seduce and inspire. Above all, the passionate brother and sister team is unquestionably a source of inspiration for the younger generations of vignerons.