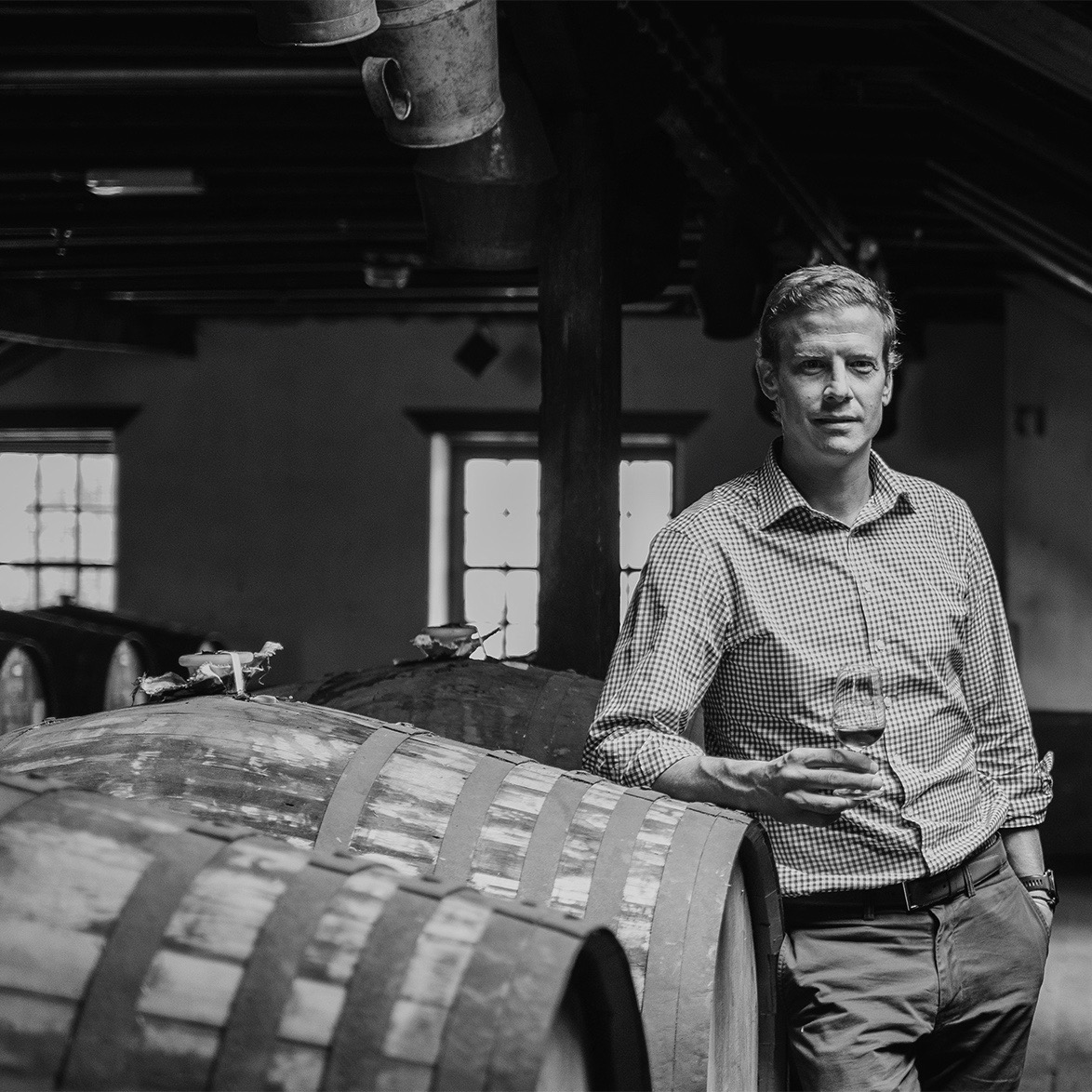 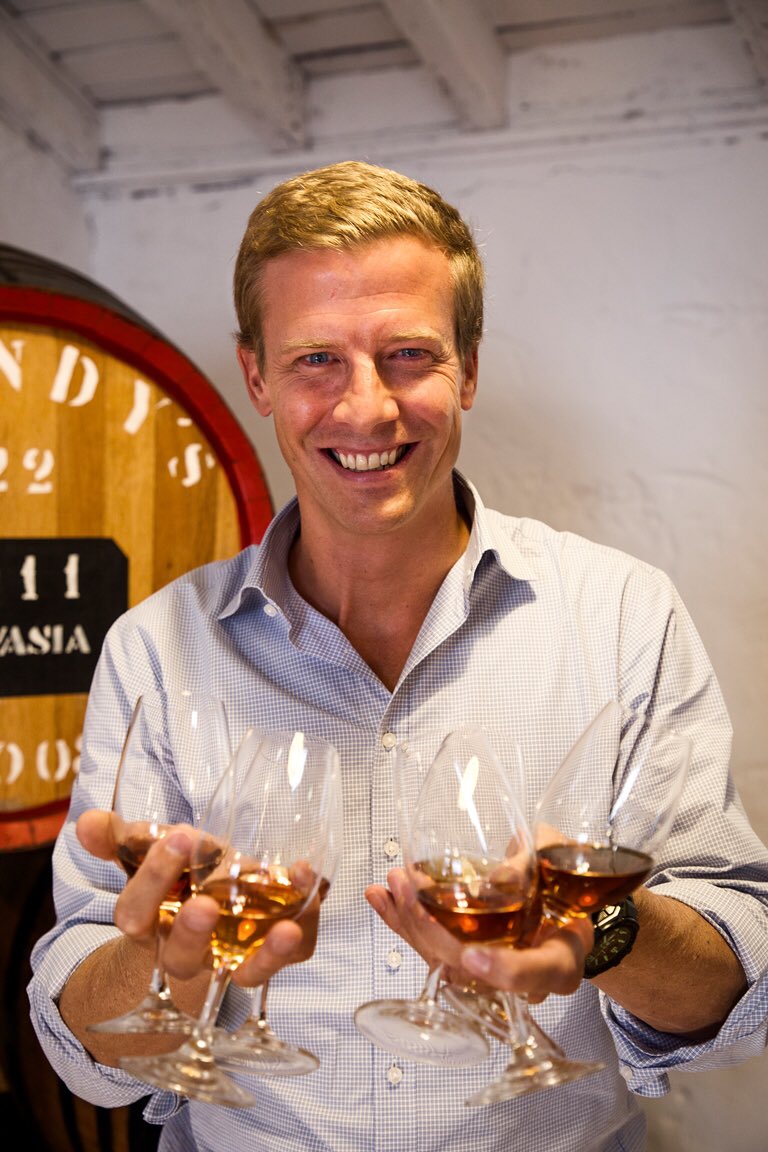 In 1808, John Blandy, an English banker decided to go into exile in Madeira. He suffered from chest pains and wanted to enjoy the privileged climate of the island. Three years later, he founded his own business as a wine shipper and general trader with his brothers Thomas and George. Simultaneously, he started the production of Madeira, a unique fortified wine which was already popular in the United States and the United Kingdom.

John Blandy´s son Charles Blandy bought ‘The Blandy Wine Lodges’ in Funchal in 1840, adjoining a monastery and where he established his cellar. Today, the Wine Lodges have remained unchanged, and although not very practical logistically, the perfect temperature and hygrometry levels make it the ideal place to age the wines.

Today, Chris Blandy, an agronomist who worked with Symington in the Douro, represents the 7th generation to manage the company. He is assisted by winemaker Francisco Albuquerque, who is bringing a more scientific approach to producing the Madeira, as well as its maturation.

Both Chris and Francisco are firm believers that farming the vineyards and tending the vines are of the utmost importance. Blandy’s vineyard holdings consist of a mere 8 hectares planted with Terrantez. Therefore, the vast majority of the grapes are purchased from more than 400 winegrowers, whose vineyards are generally minuscule. Chris calls them ‘gardeners’. They respect their plots planted in small terraces known as ‘poios’ on fertile volcanic soils, and often perched at an altitude of 800 meters. They know precisely how to cultivate them and throughout the year they are assisted by the Blandy’s viticultural team of technicians.

The terroir of Madeira is quite complex, as is the climate. Draughts result from winds coming from Africa and fungal diseases appear along with the subtropical climate. The vines are thus cultivated in pergola or ‘latada’, so as to increase the air circulation. In the latter years, many vineyards have been reconverted to modern espalier conduction, which improves the maturation of the grapes, due to increased sun exposure. Irrigation is provided by an ancient system of canals called ‘levadas’ that brings water from the mountains down to the agricultural plots, and to the ocean. Today, Madeira wine can be produced from six grape varieties: Tinta Negra, Serial, Verdehlo, Terantez, Bual, and Malvasia.

Madeira is very distinctive and the heating of the wine during the ageing process is unique. Its origins came about during the era of discoveries in the 15th and 16th centuries, when the sailing ships passed by the island of Madeira to pick up fresh water and supplies, in the form of wine in barrels, which were loaded onboard the visiting ships to provide much needed refreshments to the sailors, and to also act as ballast. Legend has it that on one particular round trip to India, the barrels of wine were returned to the producer on the island, who discovered that the wine had improved considerably, which was attributed to the heating of the wine by the high tropical temperatures, as the ship had crossed the equator 4 times. For many years, the practice of shipping wines on a round trip became normal, and gave birth to the ‘vinho da roda’ (round trip wines).

For centuries afterwards, shippers continued to send casks of their wines on long voyages, for no other reason than to develop greater character. Today, this ageing is replicated via the Estufagem (a process where the winemaker controls the heating temperature during the ageing process) and Canteiro (a unique process consisting of ageing the wines in seasoned oak casks for a minimum of four years. They are stored in lofts in Funchal, where the natural warmth of the sun gently heats the wine. Overtime, the natural heating leads to the progressive concentration of the wine.)

With time, the practice of shipping barrels on a round trip became costly and, following the introduction of steam ships, the journey became much faster, so producers started using the ‘canteiro system’. As sales grew, and demand increased, producers were challenged to find a faster way of supplying their costumer’s needs, and as a consequence, the ‘estufagem’ system was invented.

Blandy’s Madeira mainly use American oak, Brazilian satinwood, and Chestnut, and the 650 barrels and vats averaging 80 years and ranging from 100 to 750 litres are consistently maintained by a team of four full time coopers.

The Madeira wines age in the Wine Lodges located in the heart of Funchal. The premises have a unique micro-climate due to their solar exposure, brick roofs, thick stone walls, and wooden floor. Each one of the Lodge’s rooms has its own character and due to the differing temperatures and humidity, the wines all have differing ageing profiles, based on their location.

The composition of the soils, rich in mineral, iron, and phosphor, and poor in potassium, contribute to the acidity of the Madeira wines. In fact, the acidity is one of the most remarkable assets of the wines, allowing this unique wine to keep fresh, even after having been bottled for many years.

Blandy’s young Madeiras along with the 5,10 and 15-year-old wines are ready for drinking and will not improve by further ageing. And if the bottle is left opened for a considerable amount of time (up to six months), the wine will remain in perfect condition.

Blandy’s are also producing a range of still wines with the assistance of reputed winemaker, Rui Reguinga (whose wines from Portugal are also imported by Terroirs).

The Blandys are unique in being the only family of all the original founders of the Madeira wine trade to still own and manage their own.