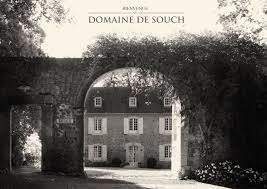 At the age of fifteen, Yvonne Hégoburu met René, the schoolboy who was to become her husband. In 1963, living in the city of Pau, the couple was searching for a country residence where they could escape and enjoy the summer days. In the village of Laroin, at the end of a long path, they discovered a traditional farm that had been abandoned for many years. It was love at first sight. They purchased it, settled there and restored the entirely ruined house. The estate is perched on an exceptional site at 300m above sea level,

overlooking the Pic du Midi d’Ossau. Yvonne and René found out that in the seventeenth century the hills adjoining their house were planted with vines, though they did not survive the phylloxera epidemic in the early twentieth century.

Yvonne, the pugnacious sixty-year-old, with a strong personality, audacious and bubbling with energy, refused to despair and, together with her son Jean-René, they undertook the challenge of planting vines around her house. A colossal task on vertiginous parcels, which required the assistance of bulldozers to build terraces. A cellar was also built. The ambitious new entrepreneur-winegrower struggled to obtain bank loans due to her age, but she persevered and persuaded people around her that her project was serious, and a life-long venture. In 1987, the 6.5-hectare vineyard, nestled in twenty-hectare woodlands and meadows, was planted with Petit Manseng, Gros Manseng, and Petit Courbu. Yvonne had to learn how to make wine and she was also assisted by local winemaker friends. Her very first sweet wine, released in 1990, received high praise in Paris.

Soon after this recognition, she embraced the biodynamic philosophy and she started to conduct her vineyards according to those principles. In those days, she was a true pioneer in the south west.

Today in her nineties, Madame Hégoburu is helped by her son Jean-René, a lawyer in Paris, who manages the estate under the watchful eye of his warm-hearted mother. He is assisted by two employees, who undertake the daily manual tasks in the vineyard, as well as in the cellar.

Visiting Domaine de Souch is like exploring a large garden of vines that cascade down a hillside with the Pyrénées mountains in the background.

The estate gives birth to well balanced, seductive wines, with extraordinary vitality, be they dry or sweet. They are inspiring like Yvonne.